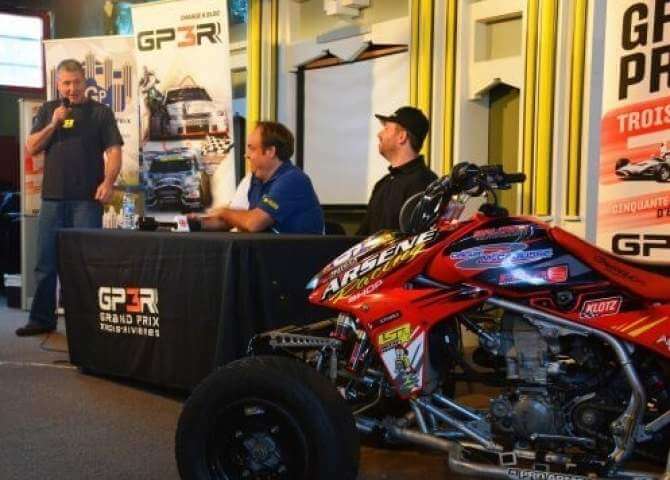 The first day of the Grand Prix of Trois-Rivières will be held on August 5, 2017, under the powerful spotlights of the National Rallycross cars of the Challenge Extreme Elite. The GP3R unveils its new Discovery Night to introduce the general public to the discipline of Rallycross at no cost, during which the Elka Superquads will also launch for the first time in 50 years of history on the Trifluvian Circuit .

This first Discovery Night is an initiative to demystify Rallycross to general public. From 5:30 pm on Saturday, August 5, the entire GP3R site will be open to public, which will have the opportunity to see national Rallycross cars of the Challenge Extreme Elite, in addition to the AMA Supermoto Cogeco and the Elka Superquads.

The final qualifying rounds of the CXE will be held just after sunset: the powerful headlamps installed on the rally cars will be lit, which promises to give a spectacular glance on the half-asphalt, half-dirt circuit of the GP3R.

"Canadian rally drivers are used to finish their races in the dark, and their cars are all equipped with high-powered projectors. When we go into this fourth qualifying round, after 8:10 pm, the lighted headlights will offer a show never seen before," said GP3R General Manager Dominic Fugère.

The Grand Prix of Trois-Rivières also announces the addition of the Elka Superquads to the programming of its first weekend of activities. It is for the first time in the history of the GP3R that all-terrain vehicles will run along the avenue Gilles-Villeneuve.

"The AMA Supermoto Cogeco has come to diversify and enhance the programming of our first weekend of activities. We believe that this new series will be an interesting addition for our spectators," added Dominic Fugère.

Sylvain "Arsène" Arseneault, living legend of the Quebec VTT and founder of the Superquads Elka Series had expressed the desire to add these off-road vehicles when he saw the AMA Supermoto Cogeco on track at Trois-Rivières in the past. His passing on the circuit of Mettet, Belgium, last fall during the SuperBiker crystallized his wish to see ATVs at his home track on the occasion of the 50th anniversary of the GP3R.

"I was convinced for a while that the Elka Superquads had their place at the GP3R. When I drove to Mettet on a circuit that also hosts the FIA ​​Rallycross World Championship, I realized that it was a must. I am very happy today that the series will benefit from the showcase offered by such an event. All the riders are looking forward to racing at the GP3R and presenting our discipline to the spectators, "said Arseneault.

Finally, the GP3R presents the new layout of the paddocks of the FIA ​​World Rallycross Championship. It is in garages mounted specifically for them that teams will be able to settle during the first weekend.

"The cars arrive in containers. Since most of the teams did not have a trailer, they had to be given space to work on the cars. With the construction of this new temporary structure we will be hosting the drivers, teams and cars as it should be and thus confirm our place among the world class events, "explained the GP3R General Manager.

This structure will also allow the installation of hospitality spaces above the new garages. These new Paddock Lodges will allow you to enjoy a first-class service, in addition to being in the heart of the action near the paddocks. In addition, the garage spaces left vacant during the NASCAR weekend will be transformed to accommodate corporate customers in the new Club Garage.

"All these new things could not be accomplished without the support of our 1,100 volunteers, who are always ready to give the best of themselves and to support us in our ideas of greatness," concluded Dominic Fugère .

The first weekend of the Trois-Rivières Grand Prix will be held on August 5 and 6, and will feature the FIA ​​Rallycross World Championship, RX2 Championship, CXE National Rallycross, AMA Supermoto Cogeco, Elka Superquads and Formula Drift Canada. The road racing series will be in action from August 11 to 13, with the NASCAR Pinty's series, the Nissan Micra Cup, the Ultra94 Porsche GT3 Cup Challenge Canada presented by Yokohama, the Formula Tour 1600 Groupe STCH, the IMSA Prototypes Challenge presented by Mazda and the Canadian Touring Car Championship presented by Pirelli.